Recently a Florida man was killed when a sinkhole opened up beneath his bedroom. The man himself was presumed dead after monitoring equipment could find no signs of life within the sinkhole. It’s hard to estimate how long it took for a sinkhole of that size to develop, but the truth is that these problems can be detected long before they become a catastrophe.  A similar story happened in Colorado, where a sinkhole opened up beneath a woman while she was in her living room. Fortunately, she survived the disaster, but her experience makes one wonder whether this phenomenon is becoming more frequent in the U.S. 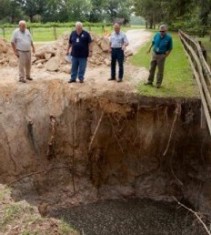 One of the most commonly blamed culprits for sinkholes is drought. States which are experiencing significant periods of drought have higher occurrences of sinkholes. The problem begins with cycles of heavy rain and drought. When the rain hits an area, clay that is inside of the soil will absorb the water and expand, so much so that it can actually lift a home by as much as an inch every time there’s precipitation. Normally, drier weather allows the clay to naturally shrink back to normal size. When there are periods of drought, however, the drying period is much more severe. Once the clay dries out dramatically, the house will also sink back down by one or more inches, creating a heaving effect.

This heaving can cause damage to the foundation of the home. While the concrete slabs used for foundation are meant to be strong enough to take the pressure of an entire home resting upon them, they are not designed for upward and downward movement. If it happens often enough, those slabs can crack. Some will even snap in two, causing the house to split in half.

The Cure for Cracked Foundations 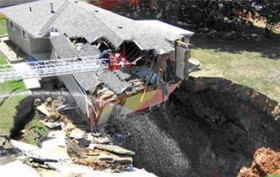 Deep compaction grouting is one of the best ways to prevent sinkhole problems. Early detection of empty areas beneath the foundation by a trained foundation contractor can prevent sinkholes from occurring before they become an expensive or even life-threatening problem.

Compaction grouting injects low mobility cement mixtures under extremely high pressure directly into the areas which support your foundation. The process uses steel grout casings and drilling to reach the maximum depth required to place the grout. Once the right points are detected and the casings are properly placed, grout can be injected directly into the areas which support the foundation of your home. This can help to create an additional layer of protection under your home’s foundation and prevent fissures that could lead to damaging sinkholes.

A Problem of Density

Foundations require dense material to stay effective. Drought lessens the density of the earth beneath a home, which can create pits, cracks, and fissures which can all cause extreme amounts of damage. While drought conditions can intensity and exaggerate these issues, they can exist in any property that has not been properly treated before home construction. If you’re concerned about your foundation, or just want to be sure that your home will have stability because you live in a drought-prone area, then talk to a foundation repair professional about compaction grouting.