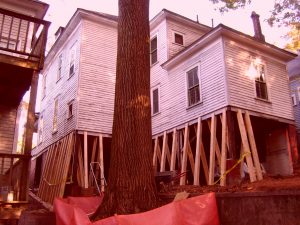 A family wanted to purchase a 1920’s home in the Grant Park area it was a classic home that needed some “love” because a portion of the foundation needed to be replaced and the house itself was just a little too small. But due to historical preservation, the home could not be expanded outside the original building envelope.

The portion of the foundation that needed to be replaced was isolated. Temporary shoring was put in place so that the foundation could be safely removed and replaced. Additional square footage was added by excavating the crawl space and turning it into a basement.

The perimeter portion of the foundation was shored using an engineered plan that allowed us to completely remove the damaged section of foundation. 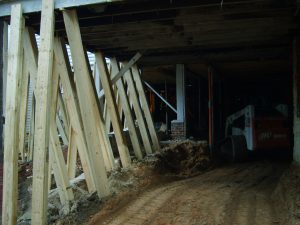 Access to the crawl space was created by excavating a temporary ramp, then shoring the upper floors to safely remove the end of the house to allow access for a machine to excavate. This was a tedious process of digging and shoring, much like building a mine shaft. The dirt was moved to an adjacent area. Once the excavating was complete and the house was shored on stilts, the next step was to replace the damaged foundation section.

The new footings were excavated and poured using 3000 psi concrete pumped in from the street. Once the footings cured, the perimeter weight of the house was transferred to the new foundation at the new elevation to provide for nine foot ceiling height.

In order to maximize the span in the new basement, a mid span beam constructed of a 5×5 box beam with a channel welded to each side for a ledger was put in place. The original floor framing system was then sistered and all but the center columns were removed. 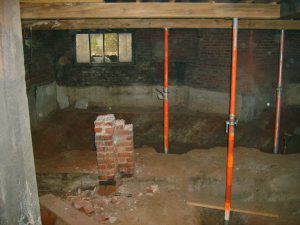 The remaining sheer cut that was inset from the original foundation by about 2 feet needed to be stabilized by a retaining wall and footing. A 24”x 23” footing was poured to act as the footing for the retaining wall and # 4 vertical rebar was tied to the footing. Then an 8” CMU wall was constructed as close to the shear cut as practical. This wall was core filled using 3000 psi grout and # 4 rebar. Then the wall was topped with a cap row.

After the retaining walls were in place, an interior channel drain was installed around the perimeter and two 4” exit lines were installed to a daylight exit. Then the plumbing was roughed in and the floor was backfilled using 6” of #57 drainage stone.

The 57stone was covered with a 6mil vapor barrier and the new basement floor was poured.

The home size was increased by approximately 1200 square feet of living space, including a full bathroom and an 8′ finished ceiling height adding considerable value and living space. 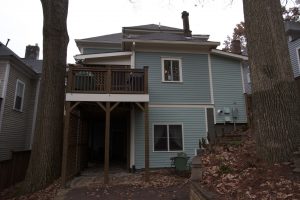 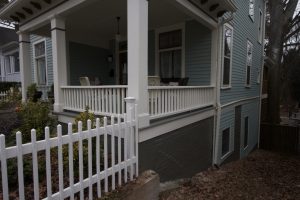 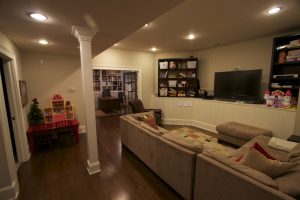 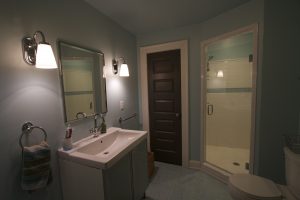 “ESOG did a terrific job installing a new drainage system, sump pump basin, and battery backup unit in the crawlspace of my house. ESOG’s experience, knowledge, and patience with answering my many questions led me to choose them. I have not been disappointed with ESOG’s work or service. Since the installation, my home has experienced quite a few heavy, multi-day rainstorms, and the drainage system has performed flawlessly. I highly recommend them!”

“We had an excellent experience with ESOG, which built new basement retaining walls and waterproofed our basement. After spending a lot of time researching solutions and interviewing several companies, I went with ESOG because the detailed construction plan was vetted by a certified in-house engineer complete with the all-important PE stamp AND the price was competitive. All of the staff, from the salesman to the engineer to the work crews, were courteous and professional and delivered what they promised.”